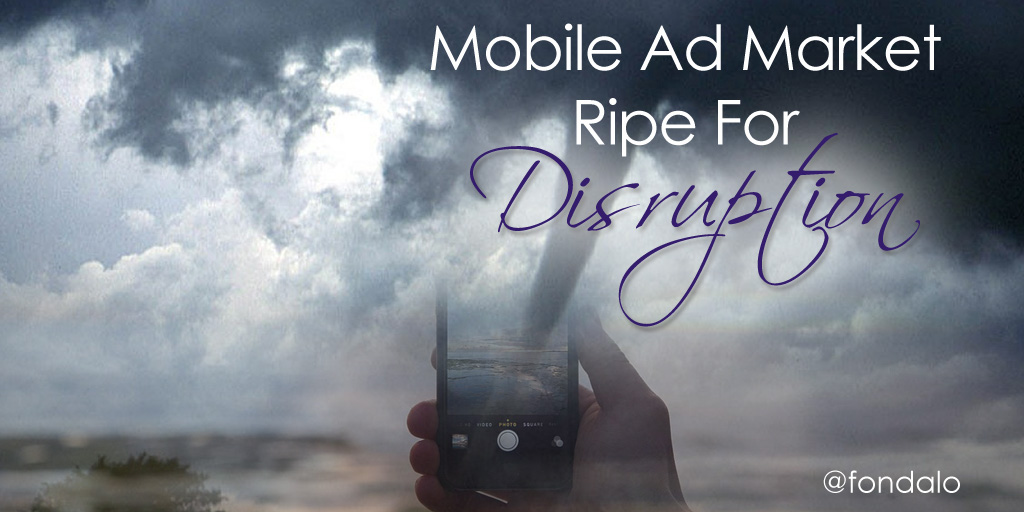 If there was ever an industry ripe for new innovation and complete disruption it is the mobile ad market. Not just mobile as a device or the apps that run on those mobile devices, but changes to how marketing and monetization is done on and through them. With mobile devices becoming how most of us utilize technology, manage our communications and consume content, there has to be something totally new and disruptive that can change mobile advertising as we know it.

Why? Here’s some facts to support my hypothesis on this…

Call it the cousin to the chicken and the egg, publishers that drive traffic to their content in order to monetize that traffic with ads are at a similar quandary. Without ad revenue, you can’t generate income from the content that you produce and without revenue you can’t continue to produce content your visitors want. This represents the chicken and the egg question that content publishers are faced with as the majority of traffic shifts from the desktop to mobile devices that are increasingly using ad blockers.

The consumer relies on their mobile device whenever they are not attached to their desk. This fact, combined with the increased sophistication of those mobile devices, apps and options is fueling both the growth of mobile ad dollars and at the same time the consumers dislike for those ads. In fact, recent research by Tune shows that over 1/4 of both U.S. and U.K. smartphone users are using mobile ad blockers currently, with males making up a slightly higher tendency to use them. Smartphone ad blockers are in even higher use already in France, where the number exceeds 30% of the population.

For many smartphone users, the amount of free content available online doesn’t outweigh the increasingly heavier mobile ad loads and increasingly intrusive types and quantities of mobile ads. The rise of ad blocking usage is beginning to impact publisher mobile advertising models. In fact a Cxense study reports that less than 17 percent of publishing industry professionals can track how many users are blocking ads from their website and 45.4% were unsure if they can detect ad blockers or not.

Did you read that???? The industry can’t easily tell if their ads are even being delivered? Talk about a startup opportunity!

What’s more? Many publishers see mobile ad blockers as a real threat to their business and are attempting to develop strategies and business model changes to counter it. The problem is that content pay walls and other tools are seemingly just as likely to ward off smartphone users as the intrusive mobile ads currently being used by publishers. Some sites are even warning users that unless they turn off their ad blocker, the free content they are attempting to view from their mobile device may be blocked.

Here’s even more fuel that bodes well for a new mobile ad technology firestorm of disruption. According to eMarketer Google’s ad revenue growth is expected to drop to single digit growth this year, yet their net worldwide mobile ad revenues are expected to rise more than four times as fast as its overall ad revenues . Huge growth for mobile advertising, despite the growing and significant mobile ad blocking challenge.

Still not convinced of the need for new mobile ad technology that will disrupt the mobile ad market and neutralize the results of ad blockers? If everything I have covered so far isn’t enough to convince you that mobile advertising technology and the industry as a whole is badly in need of new and innovative mobile ad solutions, how about new Juniper Research report that predicts that publishers will lose $27 billion in revenues due to ad blockers by 2020. That’s billion with a B.

Is there a Startup out there that is listening???

With mobile ad spending on the rise and ad blocker adoption gaining rapid growth rates with mobile users, there is clearly an opening for mobile ad disruption by an innovative mobile technology startup to develop something crazy, new and effective within the mobile ad market. As eyeballs continue to leave desktop and land on smartphones and other mobile devices, there is a need that big marketing, technology and agency brands are not addressing.

It is hard enough for publishers and blogs to get traffic to their content, but now they are having to deal with even bigger challenges, that if not solved could mean disaster. The startup or existing tech company that steps in with simple yet powerful mobile ad capabilities that address both the marketing and consumer issues surrounding mobile advertising is going to be a huge winner. I believe that whoever thinks outside of the box on new mobile ad technology and develops something to meet this need is positioned to be one of the biggest technology companies of the next decade. The time is right.

What innovation and technologies should be developed to take advantage of these ripe mobile ad market conditions? That I don’t know, as that is not my expertise, marketing new disruptive technologies is. However it is abundantly clear that mobile ad budgets are on the rise at the same time user acceptance of smartphone ads are declining, opening a massive opportunity that is screaming for new mobile advertising solutions that are extremely innovative. Do you agree?