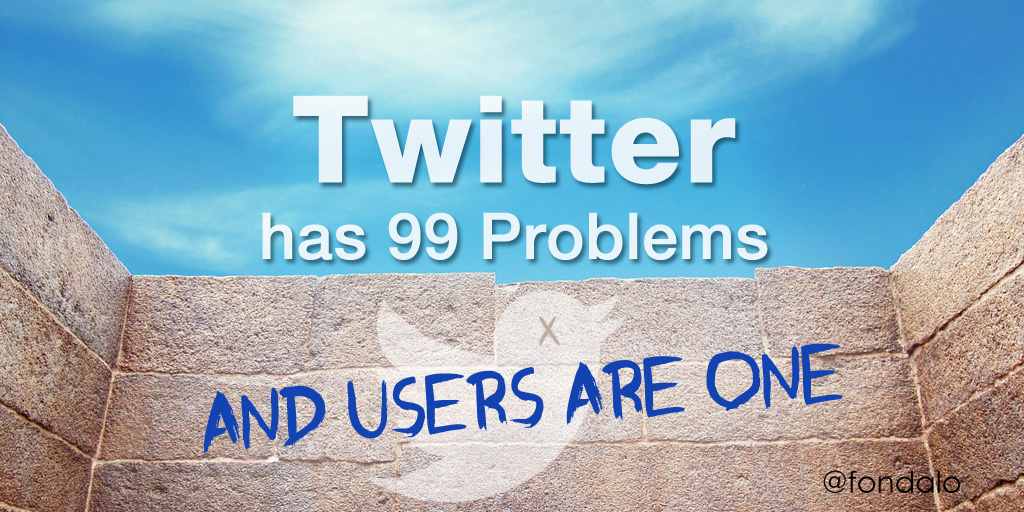 Let’s first be clear here, I am not a Jay Z fan and I actually had to look this up to remember the actual name of the song and who wrote it when I was writing the title for this post. But it’s true! Twitter has a heap load of issues in their business and their user base growth is just one of them.

If Twitter does not address their user problems and soon, they will be in trouble.

Do you agree? Let’s check out the facts.

For many years now, talk of Twitter’s user base growth has been a constant drip among Wall Street, users and critics alike. This user problem has continued to plague the micro blogging/social media site endlessly, yet through multiple executive changes and plenty of additional platform modifications, Twitter still has not addressed the root of the issue.

Early this year eMarketer estimated that Twitter would see a worldwide user growth of 10.9% this year, bringing the sites monthly active population to 286.3 million. Things seemed to at least be pointing in the right direction with double-digit growth on Twitter. Unfortunately not. eMarketer has since significantly downgraded this estimate, primarily with US Twitter users and it was all based on Twitter’s recent Q2 report.

Let’s compare Twitter’s US user base and user growth rate projections with a few other sites so you can understand the dilemma they are in right now.

Twitter will add only 3.6 million users by 2020 instead of the 13.9 million previously forecasted by eMarketer. It will lag far behind the growth of other social networks and usage as a whole.

This should be telling Twitter something very serious. Frankly, this has been a long-standing issue that Twitter has either ignored or has yet to be capable of correcting. It is my belief that there are a combination of issues driving the actual problem and I have discussed it in a previous article titled The Future Of Twitter.

Everyone Has An Opinion On Twitter’s Problem

1- Everyone has an opinion about what’s wrong with Twitter, however few of them are connecting the Twitter user base issue with the actual problems that need to be addressed. I mean everyone had input about what they think Twitter should do or change, but most of the comments didn’t address the foundational problem related to the user base growth.

I certainly understand that Twitter has a revenue problem also, but you can’t fix that without fixing the user growth issue that has been lingering for years. They go hand in hand.

2- I received absolutely ZERO comments on the nearly identical post I sent out on Twitter. This should tell us all something! The difference in engagement, conversation or even likes is pretty telling. Virtually nobody got involved in the conversation on Twitter itself, while at the same time, there was a robust conversation with multiple threads and comments happening at the same time on Facebook.

Working on an article on #Twitter. Based on it’s slowing growth rate, can it be saved? If so, how should they go about doing it?

Yes, I realize that Twitter and Facebook are very different social animals, but this situation is an indication of where the issues are. This should point to solutions that will address the user base growth that they have struggled with for several years now.

There are only a few things that are at the root of Twitter’s user growth situation. I believe these core cancers must be treated at the source, not by adding additional features and crap that nobody really wants and could fundamentally change Twitter’s platform to something it shouldn’t. Nobody wants another Facebook.

It’s fine to innovate and develop additional functions for a platform when the core issues have been dealt with, but continually focusing on additional rooms to build when the foundation is crumbling under your feet is a huge er in judgement.

User Interface: At the core of the Twitter user base growth issue is the platform itself. Yes, I wrote about this in more detail in the open letter to Twitter post I referenced before. Almost a year later and Twitter still hasn’t made it an intuitive platform that will can capture mass market adoption. Nor have they addressed the issues surrounding the sharing (retweet) function that all but kills engagement and conversation when you share a post using their own retweet function.

If a social platform is going to gain mass market use by all levels of the market, it has to be easily understood for everyone. This is what users and advertisers want and need.

Leadership: I also addressed this previously, but here we are still. What is it that is said about doing the same thing and expecting a different result? Change should come from the top down within Twitter if it is going to get where it needs to be with its user base. Management must lead the effort and make it a priority to clean up the user base, improve its usability for pro’s and newbies alike. This benefits marketers, advertisers AND users. But Twitter leadership has to get this and make it a priority. At this point it is clear they don’t really understand the level of the problem, what the issues are that are creating the problem, let alone how to correct it. THAT is the underlying challenge to Twitter fixing the user growth issue.

Again, there are hundreds of things that people would say about what Twitter should do to be better or a platform that we like more, etc. But at their core issue is this user base growth. It connects to their current and future revenue and therefore if it is left unchecked could have dire consequences. Until the root of this issue is uncovered and addressed, the core problem with user base growth and adoption will never be corrected.

What do you think?