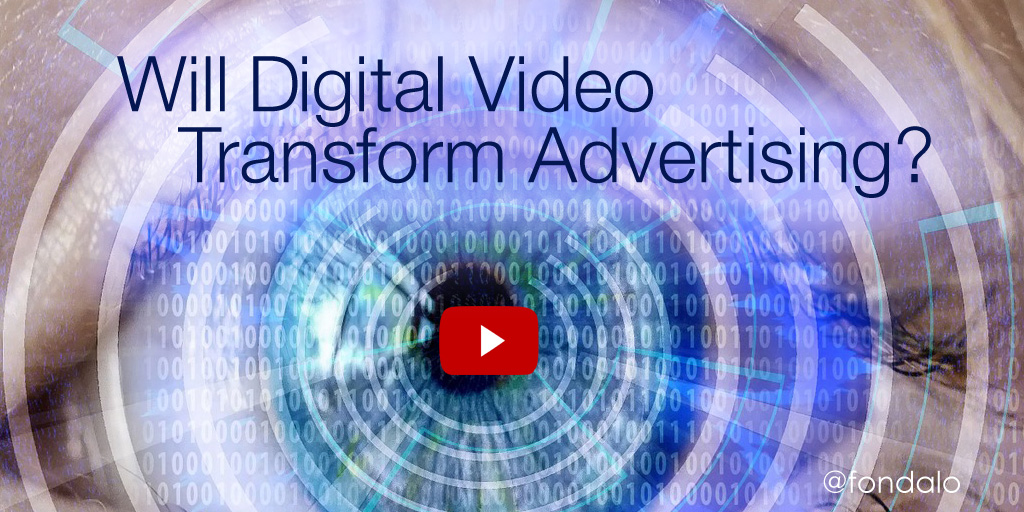 I think many would agree that Digital Video is transforming everything online and becoming a dominant force leading content on most platforms. Whether on mobile or desktop, digital video consumption is up and in all forms, while consumers and marketers alike are embracing digital video on Snapchat, Facebook, YouTube and nearly every other mainstream platform. There seems to be no end to the amount of video content that is being generated and subsequently consumed across the web.

But will digital video change advertising? I think so, and frankly it already is!

In order to understand the shift that is taking place from traditional television and digital video consumption, you need to realize what is going on quietly behind the scenes.

The Plugged In Video Exodus

Did you know that there is a mass exodus occurring from traditional plugged, cable or satellite TV? A growing percentage of Americans are cutting the cable TV cord each year. In fact based on a recent study conducted by Salesforce on this shift is showing that a huge 56% of internet users said they left cable or satellite TV due to the cost being too expensive. This was further backed up by another study by TV freedom and The Harris Poll pegged the main reason that people are leaving paid TV services due to cost at an even higher 61%.

What’s more, US consumers cited technical issues (32%), poor customer service (22%) and unclear billing (16%) that rounded out the top four reasons they have left paid TV services for internet based video content. Now that the technical complexities and quality issues surrounding streaming and internet video have been largely addressed, why would most internet savvy users want to continue with the ongoing technical problems that cable TV is still delivering to their customers? Do these behemoth cable TV and media companies think that the decade after decade outcry of deplorable customer service was going to continue to be put up with by consumers? Did they really think that consumers were going to continue to be ripped off through billing “errors”, mysterious fees and added costs?

I believe what we are witnessing is the beginning of the death of paid TV service and yet another industry that failed to innovate and transform. This, coupled with years of increasing prices, rapid decline in quality of technical service and an industry plagued with some of the worst customer service records will help drive the consumer toward free and paid streaming services and subsequently marketers to embrace digital video advertising.

The Snapchat Model Of Video Disruption

Add all of the above data showing the shift from cable video to online video sources, to the digital video disruption that was largely started by Snapchat and things start to get even more telling. As consumers are being given access to digital video content that bypasses the control of major media that is being generated by the very celebrities, brands and friends they desire content from, the need for Cable TV starts to diminish for many large niche consumers. Furthermore Snapchat, YouTube and now Facebook Live have put video content creation in the hands of the average person, which is taking more of their focus and time away from the TV in their home. Finally, the mobile consumption of digital video has become the leading form driving digital video growth, making being unplugged for video just how it’s done for many today.

The writing is on the wall for traditional paid television providers and I for one am not at all upset about it. The industry has refused to give consumers what they want, or provide a path of innovation that gives the individual the ability to create and distribute their own video content, as internet video has. Is this game over?

How Big Is The Digital Video Ad Market?

As we look at how digital video is disrupting advertising, we need to understand the growth curve with facts. Recently eMarketer released series of study data points and graphs surrounding digital video, video ads and other components related to online video growth and it tells the story.

US digital video advertising will nearly double by 2020 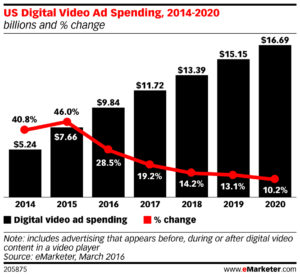 Always follow the money, right? The reality of the growth of digital video advertising cannot be denied. Though the actual dollars that are currently being spent on video ads online do not come close to even approaching the video ad spends on television, the growth is still pretty staggering. Furthermore, traditional television ad production and placement costs are and will continue to be dramatically higher for television ads over digital video ads.

As the data shows, digital video ad growth is projected to be worth $16.7 billion by 2020, growing from a small five and a quarter billion dollars in video ad spending since 2014. The most rapid growth for video ad spending online has clearly already come and gone, however the actual ad dollars being spent on online video ads has significant growth ahead.

Facebook and Other Social Digital Video Spending Is Rising Fast 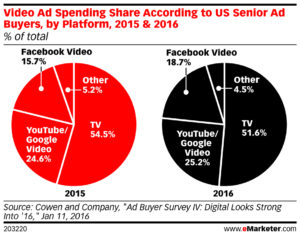 When it comes to understanding where digital marketing trends are going, the money shift is always a key indicator. You want to understand not only how much money is being spent on various digital marketing channels, but more importantly how that money is shifting from where and to what. I can tell you that the amount and shift of digital video ad spending is something you really need to pay close attention to. Let’s break it down.

US marketers are planning to shift their video ad budgets from TV (38%), Print (36%) and Cable (29%) to online digital platforms.

YouTube is the top video advertising platform for advertisers

Digital video advertising is quickly disrupting all areas of video both on and offline. This trend is hardly a fad and warrants serious consideration by both B2B and B2C brands. A strategic plan that incorporates video content creation for social, online video advertising and live streaming video campaigns should definitely be developed within most organizations. Furthermore, the tools, resources and talent required to be effective with digital video production, strategy and ad placement should be set as a higher priorities for marketers wishing to remain relevant and effective.