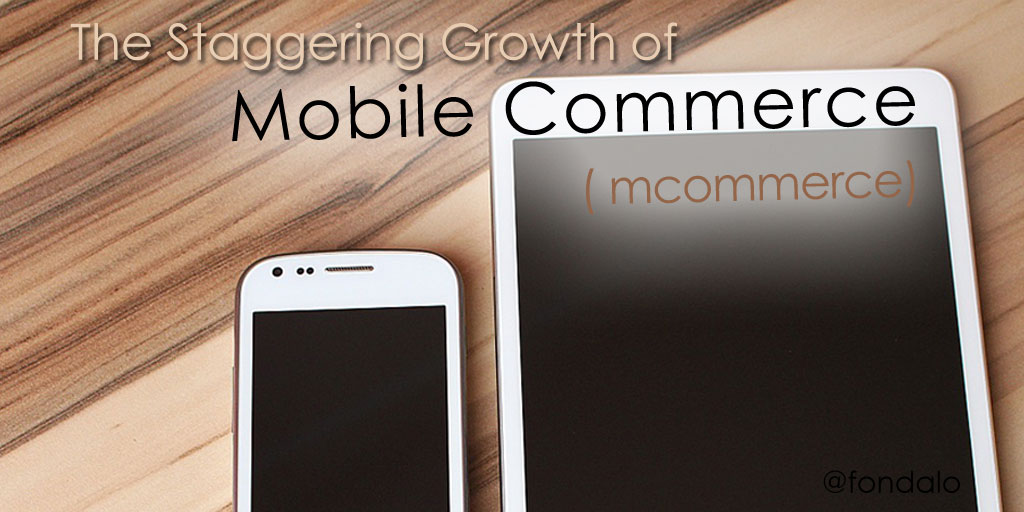 Mobile commerce or Mcommerce is the latest technology and internet convergence that is facilitated through mobile devices. Consider mcommerce as the mobile device equivalent of ecommerce for the desktop computer. As consumers continue to move away from desk and laptop computers and toward mobile, smartphone and tablet devices, purchasing through mobile devices is not only heating up, it is inevitable.

With more than one fifth of the world’s retail sales occurring within the US and the growth of smartphone and mobile device usage continuing to scale toward complete user penetration, mcommerce will continue to be an increasing percentage of all retail purchasing. It is clear that mobile purchasing growth has a bright future.

According to a recent study released by eMarketer, mcommerce represents about 26% of total retail ecommerce and that percentage is expected to reach 32% this year. During 2015, mobile commerce began to really make an impact as US consumers began to embrace the idea of making purchases via mobile devices. The percent change in 2015 as compared to the year before was a whopping 56.2%, making last year the breakout year for mobile device purchasing.

For example: Next year m-commerce retail sales are projected to be up to $151 billion dollars, an increase of 28 billion in mobile purchasing. A twenty-eight billion dollar increase is a huge increase in nearly any industry, especially one that is just getting on its feet. But when you look ahead to 2020, total mcommerce sales are expected to reach more than $242 billion, which is nearly double what it is expected to be this year.

The triple digit growth for mcommerce is expected in just four years from now, bringing it to 41% of all ecommerce sales. Based on these numbers, we could actually see just about half of all internet based retail purchases being made on mobile devices within 5 years from today. Talk about disruption?

Though the majority of mcommerce purchases are being made on the smartphone, tablets and other devices are also being used. In fact by 2020, smartphones will capture $129.44 billion of all retail mcommerce spending in the US, which represents a smartphone purchasing growth rate of 18.3%. Yet tablet m-commerce purchasing will still reach over $110 billion on its own by 2020.

When it comes to preparing for mcommerce in retail businesses, early is a really good strategy. Adopting and facilitating the mobile purchase experience for consumers early can result in long-term loyalty from those that want to make purchases on their mobile device. Developing strategies and technology that makes mobile commerce easy for the mobile savvy purchaser is where time and resources should be spent.

For the large ecommerce platforms, facilitating mcommerce is something they have largely prepared for and implemented well before now. For mid-sized and small local retailers to take advantage of the trend, more resources and attention must be focused on the mobile user. Having said that, many smaller retailers just don’t have the budget and resources to make this a reality, however for those that make it a priority, it will likely pay off.

Before smaller retail brands and ecommerce sites focus in on the mcommerce opportunity, they should first spend some money and resources improving their overall mobile experience. Many small businesses still lack a website that is optimized for mobile traffic, which is a huge prerequisite for capitalizing on mcommerce purchases. If simply navigating your site on a mobile device is problematic, you will never be able to convert visitors to purchasing from their smartphone and tablet.

Mcommerce and mobile purchasing are clearly something that is no longer a pipe dream. Consumers are using their smartphones and tablets to not only research retail purchases, but are going to complete those purchases via mobile devices in every increasing numbers. Being in front of ecommerce and mobile trends is key to taking advantage of them and brands that wait and watch will largely be left behind. Position your retail business toward the mobile consumer if you want to see long-term sales escalate.