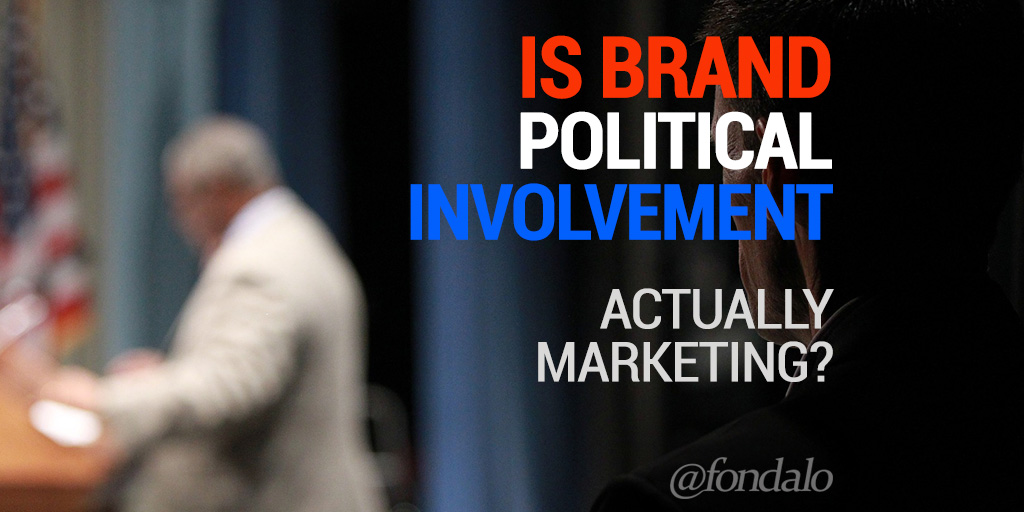 In the highly charged political environment in the USA right now, brands seem to be taking positions on political issues and candidates in ways we have never seen before. We are especially seeing this with some of the largest brands in the world. Starbucks, Uber, Amazon, Dick’s Sporting Goods and others have made “business decisions” to publicly take sides on issues that are religiously held by nearly half of the population.

This post, to be clear, is not about political issues and I will not debate those topics here. Rather I want to dive into the marketing aspects of brand involvement in politics, both the positive and negative resulting impacts.

I would say that whether for good or bad it certainly is marketing when brands take political positions or come out for or against candidates. Let’s look at this.

Should Brands Engage In Politics?

Let’s first look at this from the national and international brand perspective. The fact is that many huge brands such as Facebook, Google, Amazon and Starbucks have made decisions at the highest level to be very vocal about the politics of the day. It seems that a week or two doesn’t go by before we hear the CEO of one of these or another company speak out about some highly charged political topic or politician that is dominating the news.

When big brands chose to take a side on an issue, it will definitely tell like-minded consumers how their company sees the world. And if your customers are of the same mind, marketing is certainly being done, connections are being made and favor will be gained with those customers who are passionate about the issue or candidate that the brand is publically favoring.

If a brand is convinced that the significant majority of their customers and prospects are in agreement with their action, then it may be something the brand should consider doing. So in this case, it is a conscious decision on behalf of the brand to weigh in on politics as a marketing tool.

The Downsides To Brand Political Involvement

Many brands often overlook the fact that there may be a large number of people that disagree with a particular political view that the company has publically supported. This can cause significant problems for brands that decide to weigh in on political matters. Now if your target customers are all for the political view, that’s one thing. But don’t kid yourself, half of the people in the USA see the world one way and the other half oppose that same view with passion.

Without getting into issues, I will give a generic example of the fallout that brands risk when becoming political. In fact, I no longer do business with some of the brands listed in this article for this reason. I also, don’t support certain actors, studios or movies for the same reason. I would consider myself to be an average American in that I truly don’t care what someone chooses to believe politically. I have my views and I try to keep them largely to myself.

However, when an actor, a company or other organization decides to make their “brand” a tool for a specific cause, candidate or view that many others are in total disagreement with, they are forcing a lot of average Americans to make a choice. They are forced to choose a side also. For many, that means deciding not to support a company.

But it can go further than this. Over the past few years we are seeing people full on boycotting certain companies over this kind of situation. Many of these situations have grown to become fairly large movements that end up impacting the company’s bottom line. Risky at best. Not a good business plan that could dramatically reduce revenues and growth at the worst.

An Example Of A Brand Being Negatively Impacted

Though I researched several companies facing the negative impacts of getting involved in politics, I decided to use just one. Uber is a large brand that got highly involved politically and the impact of that decision was later combined with additional public relations issues to cause analysts to recently reduce forecasts for the company. Additionally, this combined effect also led analysts to increase the market penetration forecasts for their largest competitor Lyft, who has not followed their larger competitors lead of being political. The results to Uber’s future is yet unknown, however their projections and market lead are certainly being questioned.

Another quick example is the NFL. We all know about the kneeling for the national anthem and how the NFL ignored it, to the outcry and eventual boycott from many on the other side of the issue.

Should Smaller Brands Come Out Politically

It’s one thing for a major brand to get involved in politics, it is another thing for a startup that is trying to breakout or a mid-sized brand focused on revenue growth. Unlike a large international brand that can likely afford the downturn in revenue, while waiting for the heat to blow over, a smaller brand cannot. One small miss on revenue, a negative impact to cash flow or the wrong kind of press could literally kill a smaller brand that picks the wrong issue to become politically involved in.

It is my humble opinion that brands of any size should stay out of politics, endorsing or ridiculing candidates or issues. The fact is that most average people just want to like a brand for what they make or how they treat their customers. When a brand makes themselves about polarizing topics (on one side or the other), it now becomes something that forces decisions.

I will go further to say that smaller brands with smaller teams, should as individuals of said team, be far less vocal politically on social media. Do they have to? Certainly not. I would never tell an individual what they have to do or not do. However, wisdom should be employed here.

Some Advice On Brand Political Involvement

Create amazing things, solve customer problems, deliver value and treat customers like family. Leave the politics to the politicians and keep your brand far from the firing lines of political warfare. Business and marketing are hard enough without pouring tons of gasoline on your company and lighting it ablaze with political turmoil.

Either way you decide, you are marketing. The question is this… will your brand political involvement or lack thereof be for the good or bad of your company?